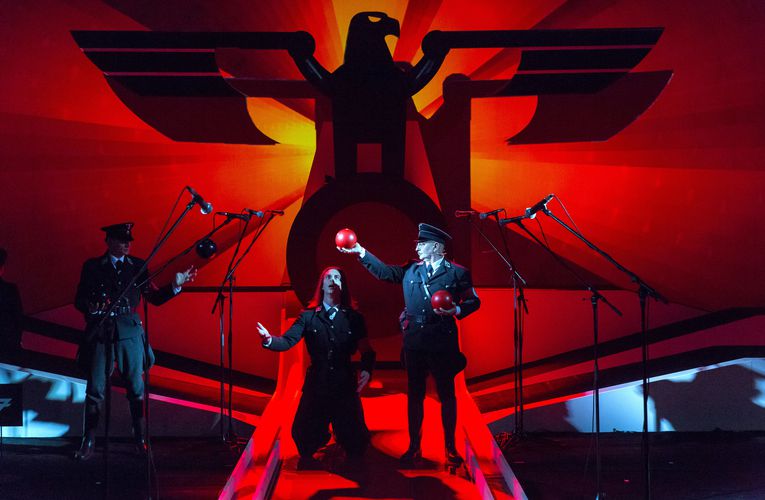 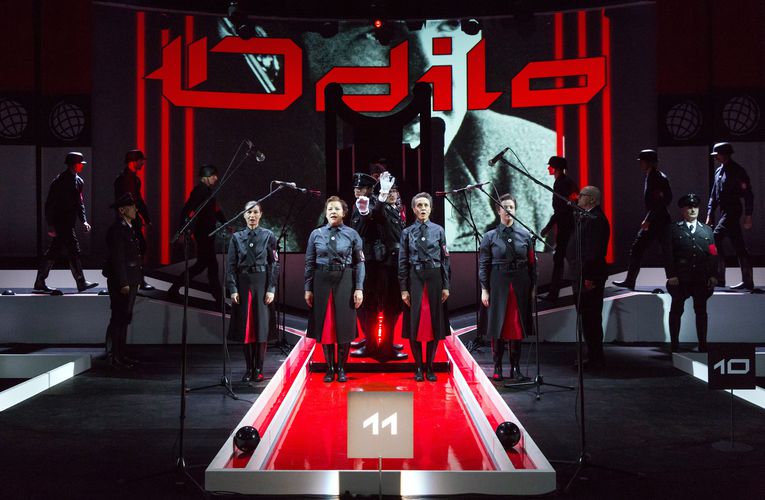 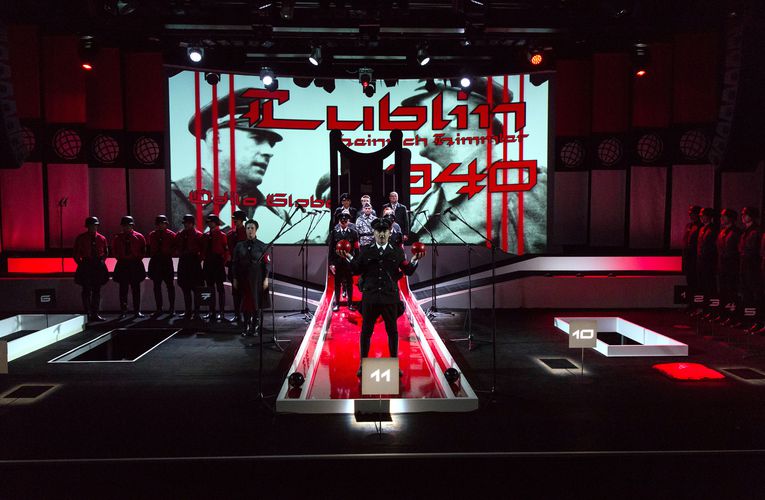 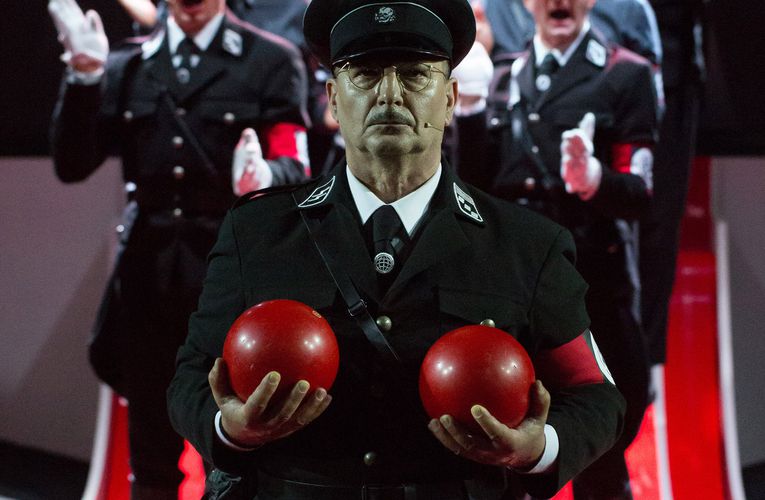 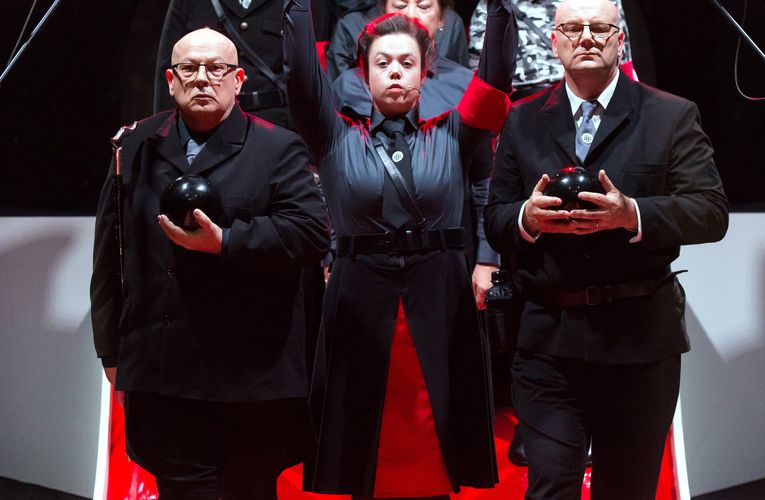 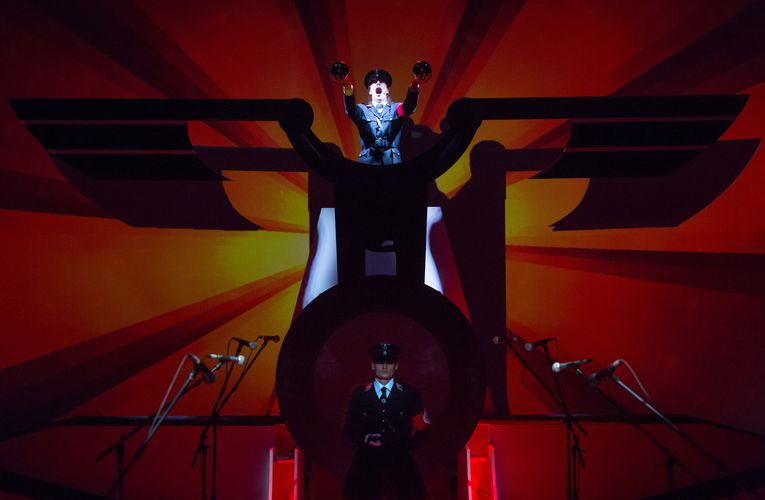 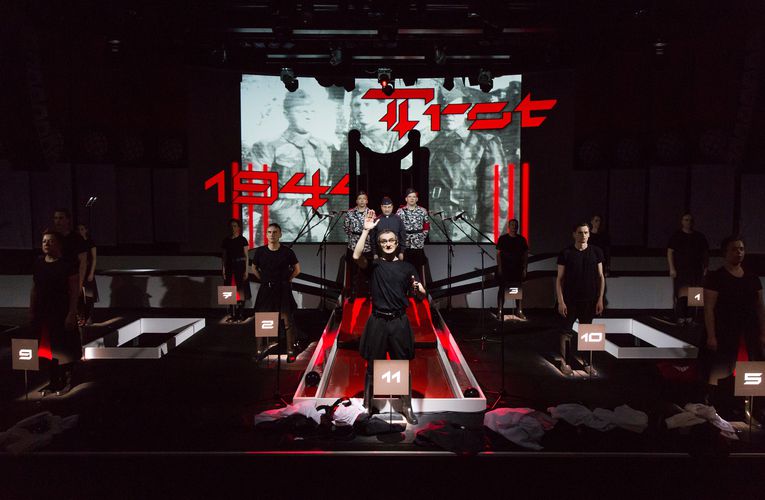 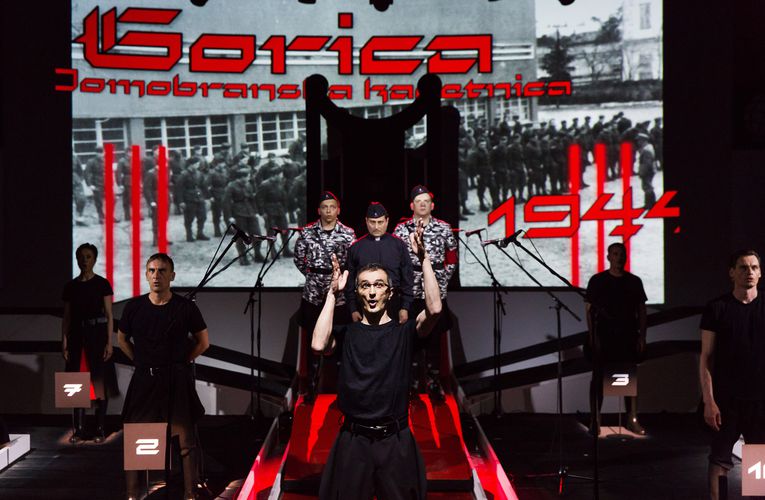 Theatre performance Odilo. Obscuration. Oratorio. premiered in the insecure time just before the potential outbreak of the new world clash. The geostrategic and geopolitical interests, new rising of nationalisms and racisms. The news scarily similar to those our ancestors faced before and during World War II.

The coproduction of Mladinsko and Kino Šiška, based on the textual masses by Peter Mlakar and Dragan Živadinov, is fully conscious of the dangers of the time in which we live, as we are witnessing a new rise of nationalism and racism. The key elements of the project are thus a clear anti-Nazi stand, the killing of Globočnik’s name, and the obstruction of the resurrection of his acts. The performance methodologically refuses to understand his acts and National Socialism as something normal. Even more, by using the ritual of killing his name it wants to, once and for all, be done with Odilo Globočnik, as well as the Nazism and fascism, and prevent their return and rise. Within this frame of the ritual killing, the performance stages the awareness of personalised evil while refusing to enter the theatre identification model. National Socialism is the greatest realism in the history of humankind!

Živadinov renounces the verisimilitude, the realism that philosopher Peter Mlakar, the author of the play about Globočnik which was the base for the performance, links to Nazism, which he calls the greatest realism. And it’s the non-literalness, abstractness, that prevents this would turn into just another narration in politics and biography. The rituality reveals the metaphysics of the evil of the Nazism, itself nothing but a ritual of crime.

The position of theatre artists leaves no doubt: Nazism is (or was) absolute evil, and Odilo Globočnik one of its most efficient executors. 'A very talented criminal' who plans the destruction of Poland while bowling. The man who led the murder factory that was the Rižarna (Risiera di San Sabba) in Trieste. So he doesn’t have the right to speak or appeal. This is why his words are chanted by the choir. Likewise, the attitude is very clearly stated towards the (Slovenian) Home Guard members whom in the performance Globočnik addresses as 'compatriot Home Guards' and wants them by his side, in Gorica and Trieste, as he considers Slovenians to be his people. The performance doesn’t open the question of Nazi collaboration, but shows the Home Guards as – less important – helpers to absolute evil. So in the end [the performance] advises them: be unheard, invisible, immobile. Without the right to appeal.

Odilo. Obscuration. Oratorio. is in the first place a performance-statement, and with this also an overt political gesture, which is in its stance (total condemnation of Nazism and categorical refusal of its “derivatives”) extremely direct, although at times perhaps not evenly clear. It is in fact a one-hour incantation ritual of exorcising evil from the community that thoughtfully moves away from the regime of the 'dramatic' and also from any kind of concrete personalisation, including the eponymous (non-)hero; the role of the true protagonist is taken over by the chorus as the representative of the audience and the carrier of the idea of the performance. In this, the performance refers to ancient Greek (pre-)theatre forms, which to a certain point also reflect in the organisations of the stage space, the difference being that this is not a ritual revival of 'mythical' content – the content is convened simply to 'demythologise' the session and finally destroy it – or, in the words of the choir: 'We will only revive you to kill your name.'

[In the performance Odilo. Obscuration. Oratorio.] all elements, acting, space and lighting, music, choreography and of course the text harmoniously deconstruct his [Globočnik’s] name. By placing his words and his uniforms into the mouth and onto the bodies of the chorus, this name was disembodied and disintegrated in the spoken words and in the choreographic  presentations and it disappeared into the air following a clear decision that the possibility of reconciliation or acceptance is nil. […] This also leave a mark on the ending of the performance, when the ensemble removes Odilo’s uniforms, by listing 11 concentration camps in Poland they respectfully bow to the victims and don’t come back for a well-deserved applause. Theatre and reality conflux into one, and the message of the Odilo. Obscuration. Oratorio. contains so much light that it resonates unburdened for the further reflection.

With the symbolic act of annihilation of Odilo’s name, Odilo. Obscuration. Oratorio. also constructs itself as a theatre intervention or a protest against the renascent forms of fascism, racism, sexism, xenophobia and nationalism that are becoming a part of the performance with the textual allusions to the contemporary politics of intimidation and oppression (focus on family, reduction of female persons to the social role of only mother, pushing women into the private sphere, intimidating racist and nationalist politics, intimidation against 'stealing jobs' etc.). So it is not just about killing Odilo’s name, but also about the killing of the oppressive politics that are only just emerging.