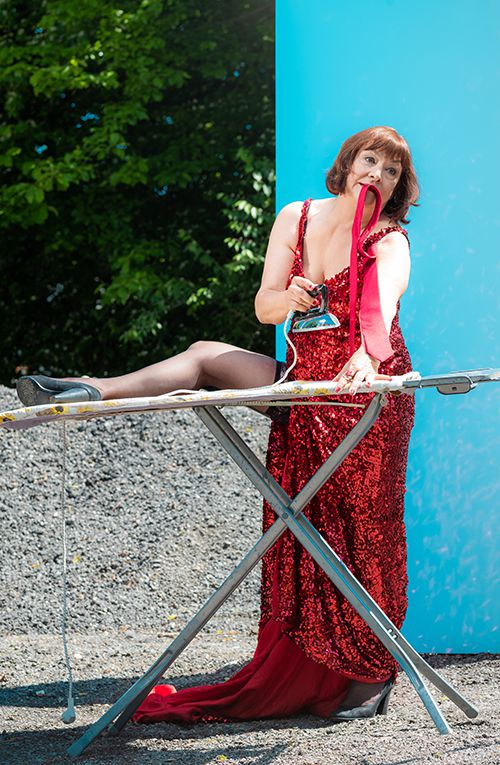 In addition to her work in the Mladinsko, where she’s worked since 1983 and where she has been a part of a series of groundbreaking performances, among them Missa in a minor, Fear and Courage, and Scheherazade, Damjana Černe (1958) has marked the Slovenian theatre landscape importantly with her work in non-institutional projects and groups as well, for example in the famous KPGT, and also Glej Theatre, Koreodrama, in collaboration with director Dragan Živadinov; among others she acted in his projects Baptism Under Triglav and Gravitation Zero, the first theatre performance in the world in zero gravity space. She works regularly with Program Ars of the Radio Slovenia, and her participation in several international co-productions has left a mark on her creative career, most recently in Conquest of Happiness (2013), A Show for Tourists (2018) and Stop me (2020); in 1993 she was a part of the international project Sarajevo, directed by Slobodan Unkovski based on the text by Goran Stefanovski and presented in Antwerp, European Capital of Culture 1993; in Mladinsko we have to mention the acclaimed performance Don Juan. Kdo?/ Don Juan. Who? directed by Anna Furse. In 2016 she received the ZDUS (SADA) Award for acting for her roles of Jackie and Ingeborg in Princess Dramas, in 2006 the Župančič Award for the roles in season 2005/06 (among them in The Epic of Gilgamesh) and in 1985 Golden Bird for the role of Katarina in Fear and Courage.