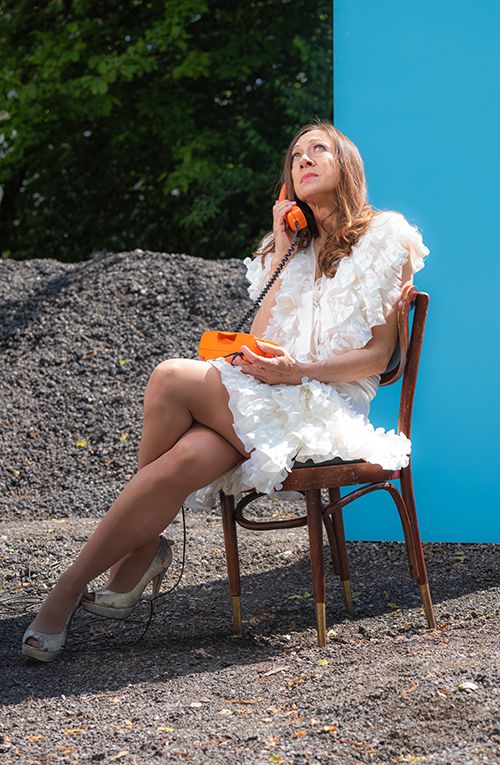 Maruša Oblak (1966) was a member of the Mladinsko from 1988 to 1990, worked abroad between 1990 and 1993 (in Austria, Italy, Switzerland) then returned to her original ensemble. Even as a member of the Mladinsko, she has continued to work internationally: let us mention two projects, Requiem for Metamorphosis by Jan Fabre and Phedra by Saša Dimoski directed by Alekandar Ivanovski. In 1997 she enrolled in a graduate programme in acting and finished it with a monodrama Moskovsk, her own adaptation of the novel Russian Beauty by Viktor Yerofeyev. She’s dedicated a substantial part of her creativity to her own projects: she thus created Mary Poppins, Diva Saint Mother Bitch and a cabaret performance Three Fingers Below the Belly Button in Mladinsko. She worked as an acting teacher, and she is also known from cinema and television screens (Artificial Paradise, Tryptich of Agata Schwarzkobler, Miss Mary, Fortune Teller, Mother’s Day). In 2005 she won the Sever Award for her role of Catherine de’ Medici in Queen Margot, in 2002 the ZDUS (SADA) Award for her roles in Peter Pan and Three Sisters, and, along with her colleagues, the special jury award at the International Small Scenes Festival in Rijeka (Croatia) to the ensemble of Three sisters for collective performance, and in 2001 Golden Dot for Mary Poppins, the best performance of Pippi’s Festival in Velenje.