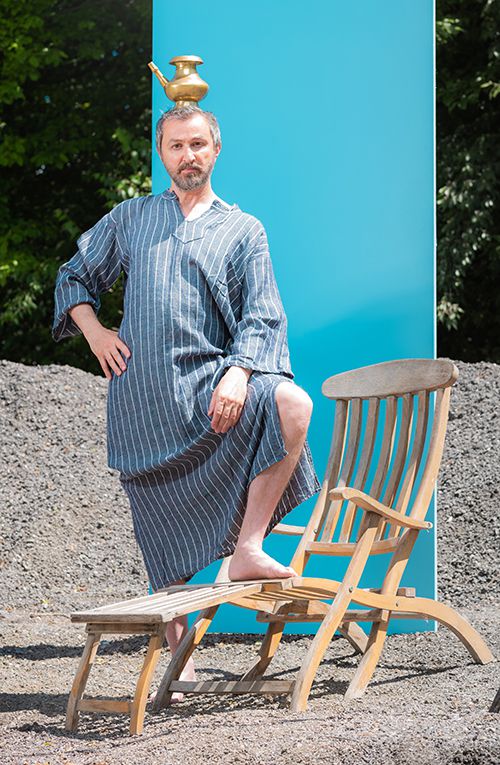 Ivan Peternelj (1968) got his degree in acting in 1996. Until 2003 he was a freelancer working on his own projects, but also in groups Betontanc and Muzeum Theatre and a number of other independent productions, in Ema Kugler’s videos etc. After working with the Mladinsko on several projects, he joined the ensemble full time. However, he hasn’t given up working in non-institutional projects and he continues to direct. In Mladinsko he has created Amado mio, The Fisherman and His Soul and The Eleven Thousand Rods (all three in co-production with ŠKUC theatre) and Moon on the Road (in co-production with Bufeto Institute). He has recently founded Art Association AVGUS where he continues to direct: Chagall, The Ballad of  Reading Gaol (Mini teater), Peter and the Wolf (SNT Opera and Ballet Ljubljana). In 2018, The Slovenian Association of Dramatic Artists bestowed him with the Ivy Wreath Award for his work as a director (The Ballad of Reading Goal, Peter and the Wolf) and choreographer (Dog and Pony Show, Peter and the Wolf). In 2013 he received the Župančič Award for acting achievements in the previous two years and for the directing of the performance The Fisherman and His Soul, in 2004 the award at the festival of Slovenian chamber theatre SKUP in Ptuj for the role of Caspar in the performance of the same name, in 2003 the Sever Award for the roles in the performances Supremat, Snow White and the Seven Dwarfs and The Visages of Sand, in 1998 the Borštnik Award for a young actor for the role of Man in the Elevator in The Mission and the first place award at the PUF Festival in Pula (Croatia) for the project Medium Coeli, and in 1992 the Župančič Award together with other members of Betontanc.