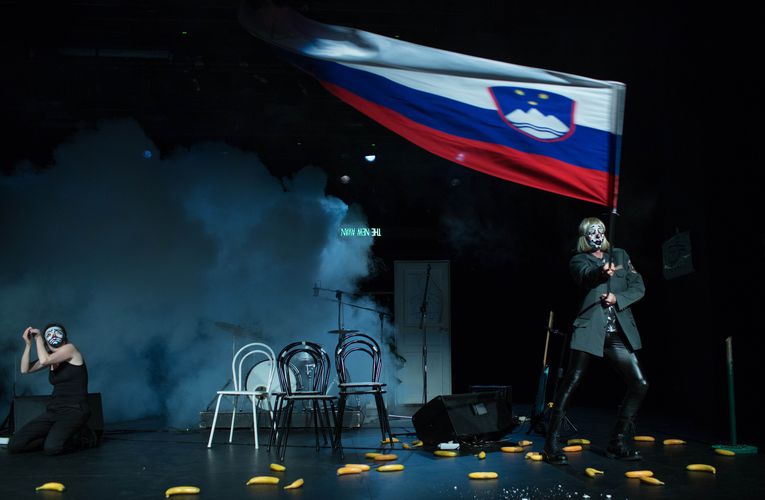 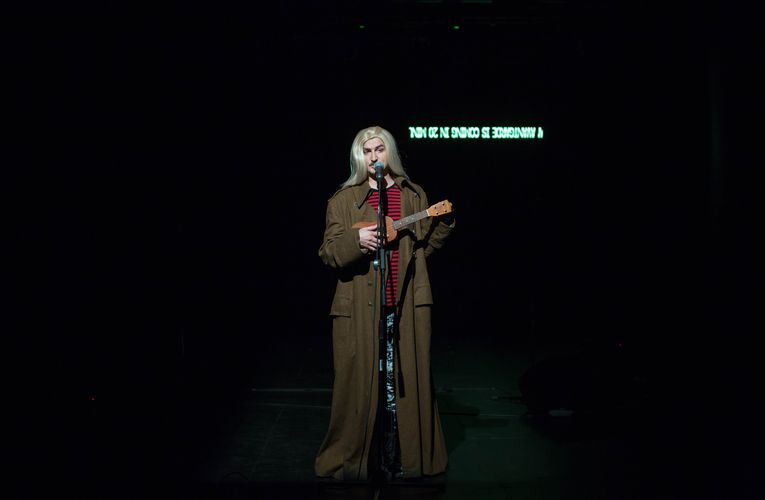 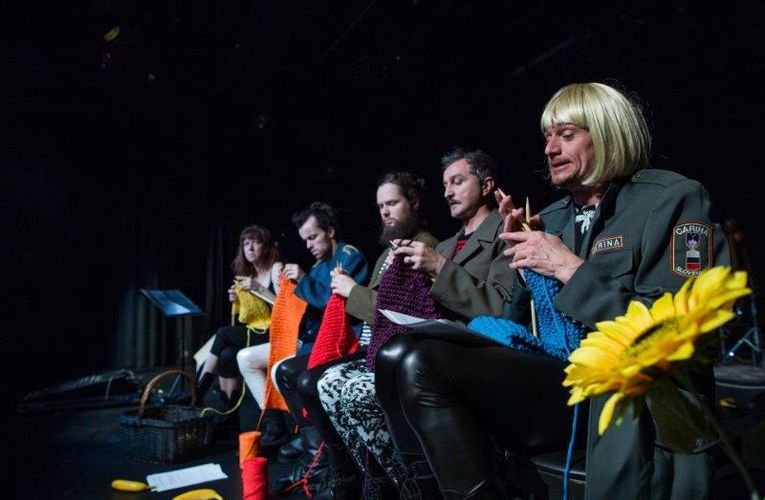 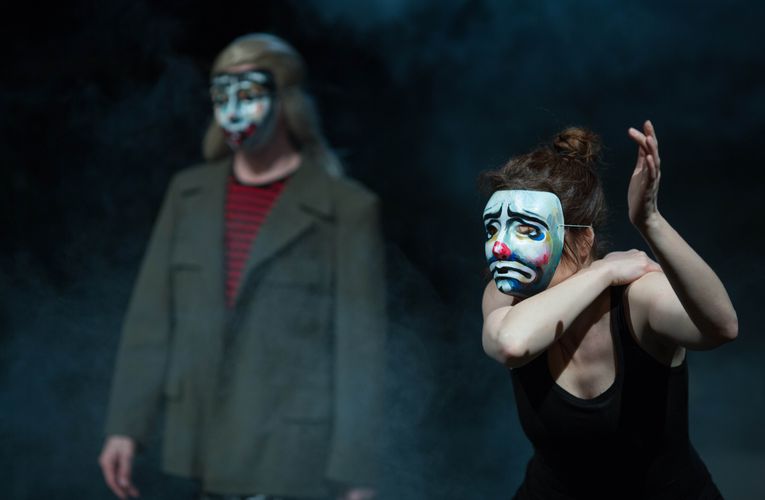 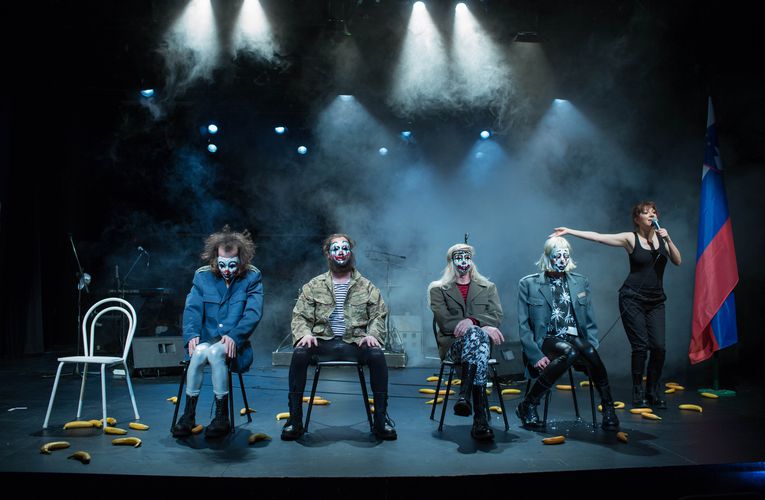 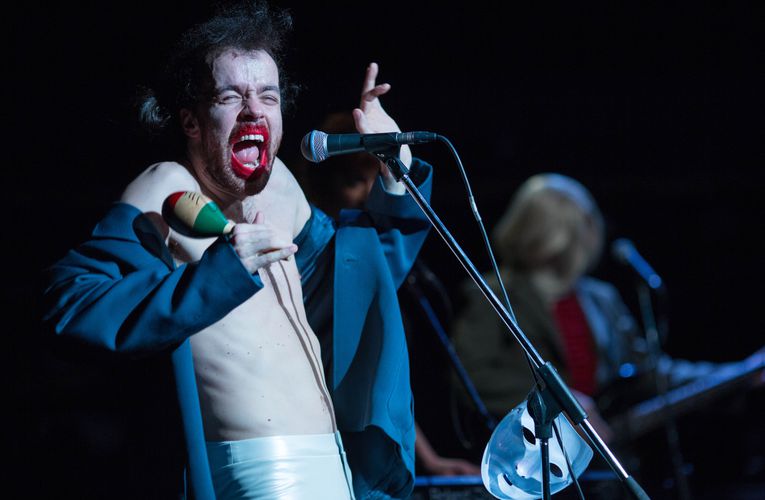 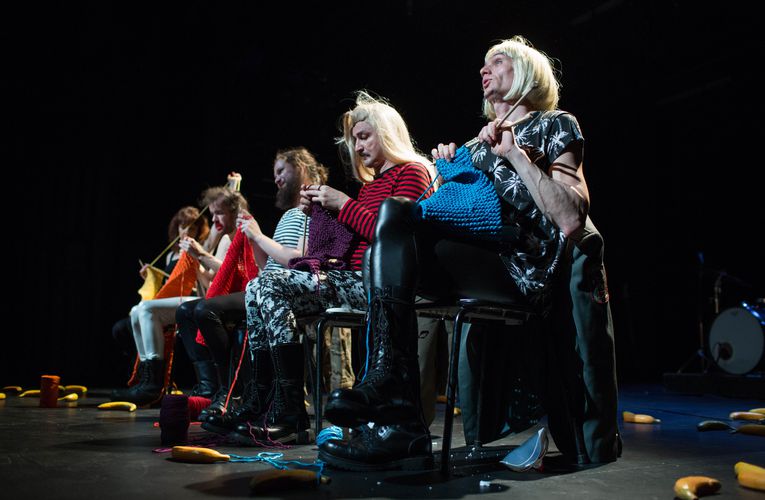 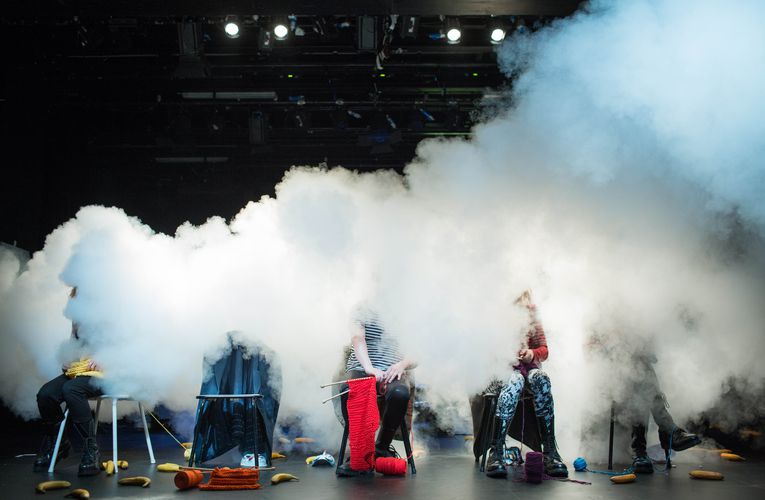 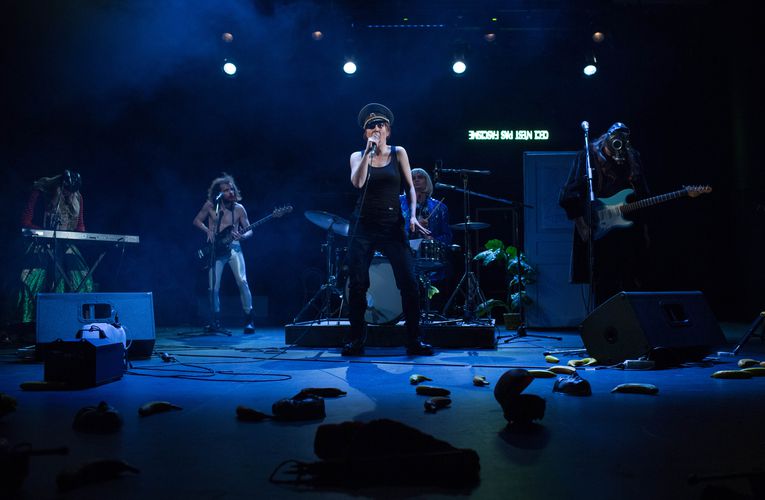 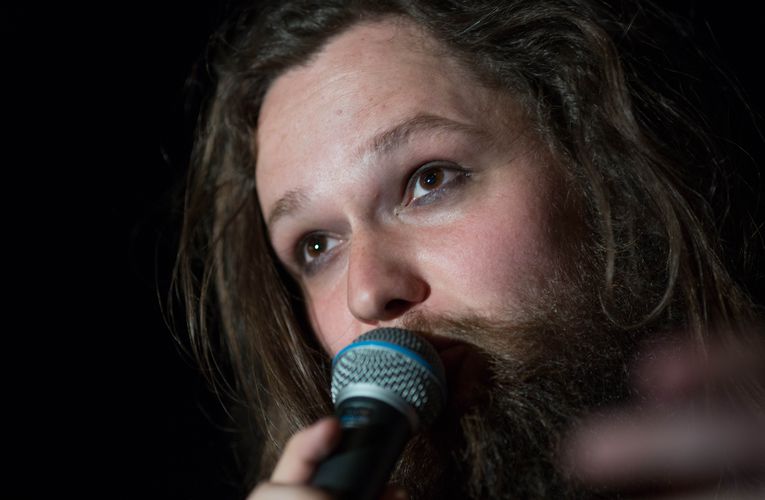 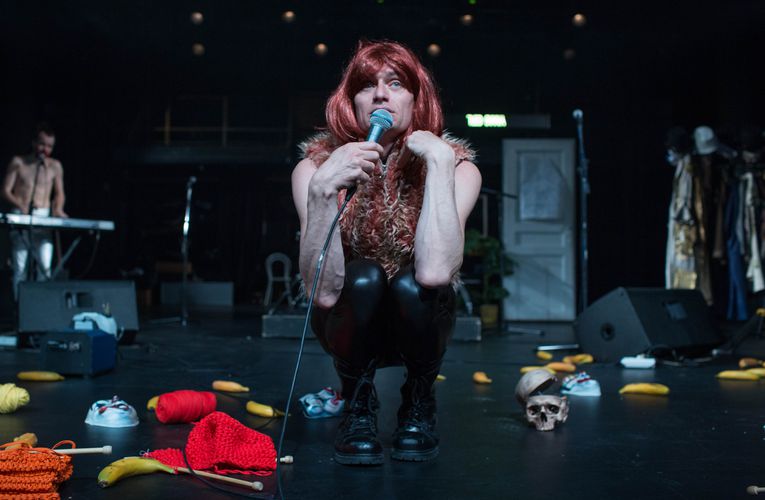 The final version of the text was devised in collaboration with the team.

On stage, there are five clowns trying to do an avantgarde neofascist piece. Or are there five actors that just haven't noticed yet that they themselves are part of a fascist mindset already? Or both at the same time, as they can only exist as their own opposite, the opposite of things? If we appropriate the tools of the opposite side, its mechanisms and the way of thinking, we can overwrite them, turn them into something completely different. We negotiate with our own fears, we become playful, even with the things that we fear or are opposed to the most – it's only through a game than they can be disarmed. What if we imagined a neo-fascist as a sentimental, vulnerable person who questions the reality? In times when everyone has become satirical, when they appropriated tools of exaggeration, like provocation, caricature, polemic, the theatre is forced to re-claim these tools.

Boris Nikitin investigates the line between reality and fiction, between document and its fake, and just loves to blow up those categories. He plays with the rhetoric and propaganda. At first, you identify with the fascistic discourse on stage, then the fact you bought it chills you to the bone, then you ask yourself how could this happen in the first place. What is the reality represented on stage? The categories are blurred, everything is questioned.

Each argument is supported by a likeable comic action: shrouding the stage and auditorium in intense smoke, detonating the stage props, knitting winter scarves, acting and singing in the style and rhythm of the best Laibach numbers. Musical and dramatic intermezzos, clown-like military costumes, make-up, masks and wigs – all this makes it easier for us to master the abundant text thrown at us mercilessly by the actors. Nikitin's theatre is rough, frontal and direct. Witty remarks and actions alternate relentlessly: when an idea runs out, a new one is sparked, placing the first one in a new light. What follows transforms into the opposite of what was before: the display switches between two messages, 'A new avant-garde will be here within 20 minutes,' and 'No fascism here.'

In the Bitef Theatre, the Mladinsko Theatre presented sacred, absolute theatre: raw, rough, defoliated, pristine and ceremonial in the avant-garde sense. This treatise on freedom in stage form, which is the message of the talk on neofascism, would be unwatchable and exhausting, had director Boris Nikitin (and dramaturg Goran Injac) failed to find the right key to transfer the former obscenity of Jarry's King Ubu into the political kitsch of existing neofascism, which is appealing and tempting, as is typical of kitsch.
[…] Nikitin's achievement in this performance – making us take the laughter with us out of the theatre hall due to fear – speaks of what is inside us, and this is our punishment. Furthermore, the grotesque originating in our voluntary agreement to participate in the dispute with empathy is our special atonement. In The Opposite, fascism sadly has a human face due to the game of switching theses and emphasising its anthropomorphism. With its clown-like crooked, menacing smile... In each joke, there is also a bit of a joke, they say.

The text does not seek to resolve the dilemmas of contemporary socio-political relations; neither does it seek to play smart or to raise the revolutionary adrenaline level. It relies on general formulations, the widely accepted and normal whining of an average human, e.g., 'what has befallen us?'. The subversion is revealed in the absurd, which is used throughout act one to undermine any elevated political enthusiasm or any attempt at taking the topic too seriously. The set is mastered by grotesque clowns, who seek to make an avant-garde neofascist play, yet all their attempts lead to dead ends, to a lack of the power required for shaping and rounding off this topic.

A verbal treatment of individual serious topics begins playfully and unobtrusively in the context of at times quite bizarre situations (when discussing fascism, all the actors are sitting and knitting long colourful scarves) that force one to laugh. The actors, in just a few sentences, skilfully turn Nikitin’s text and its situation around and reveal a new perspective that freezes the smiles on our lips. […] The production is filled with such powerful and sharp lines. Actors keep the spectators on a leash and can gradually direct the atmosphere in the audience. […] Nikitin’s production is provocative, and thanks to the theme it partly plays with controversy, which makes it even more attractive and promising. Individual aspects of the production are precise; the only danger for the Czech audience is an immense quantity of words in Slovenian. But, it is a strong artistic experience, full of philosophical considerations and interesting acting achievements. And above all, it is a bitter grotesque about life that soon turns into something completely incomprehensible.

The many topics that The Opposite opens include almost all the actual problems and specifics of the public and political sphere. Through the questions of populism, dilemmas of freedom of speech and polarised society, it doesn’t actually question the political system, but the play of subtle strategies with which fascism successfully addresses and unifies crowds. But the performance doesn’t create a zombie-like monstrosity; it eschews caricatures and brutality of fascist violence and focuses more on satirisation of its own attempt of stage representation of fascism and thus returns to the distress of an individual which the right-wing option channels more successfully.

The Opposite in its monologues incessantly moves through the zones of emotions and distress, released from the political choice which we recognise in different existential experiences, the performance individualises the 'enemy' (fascist), which enables empathy with neofascists, and thus with wonderful preciseness sheds a light on two things: that the left perhaps doesn’t solve problems because it detects them wrongly, and just like the alt-right homogenises and dehumanises the adversary, and at the same time shows that we don’t need 'brutal emotions' but rather supportive (rational) empathy and compassion, the ability to listen; otherwise the polarisation of groups increases, and at the same time, the 'explosion' becomes an increasingly more serious threat. Here now a distinction must obviously occur; the anger must not deteriorate into hate and killing, marching into death 'protects' no one (and solves nothing), but – and this is the key moment of the warning to the left – first we have to have an interest in the protection and solution of the conflict and not in the 'elimination of the enemy' from the system. Along with the enthralling conceptual realisation and acting, the performance has an exceptional dramatic arch, which brings the audience from a relaxed fun to the reflection of their own political position and a powerful emotional experience. A performance that would require a research approach; it’s not possible to analyse everything that it includes in a short review. An exceptionally thoughtful and refined, simply brilliant work of art.

Boris Nikitin’s concept […] offers several interesting content and thematic starting points. Among them is the question about the borders of the freedom of speech in modern art where, according to Nikitin, pretty much everything can be said. The text is thus conceived as a play about how this space of freedom gets appropriated, as the director states, by alt-right and neofascists. [… I]n the relation to the text [it is] that much more interesting to follow the acting interpretation of the characters. They are brilliant in using different techniques, contrasting stylising, rhythm and exceptional stage presence to embody the mass of the linguistic material in an interesting way. The organisation of the acting material, from the subtle flipping the intentions to the spatial organisation of the scenes, and the musical and visual dramaturgy in the performance as a whole, shows the director to be a very interesting author as well.