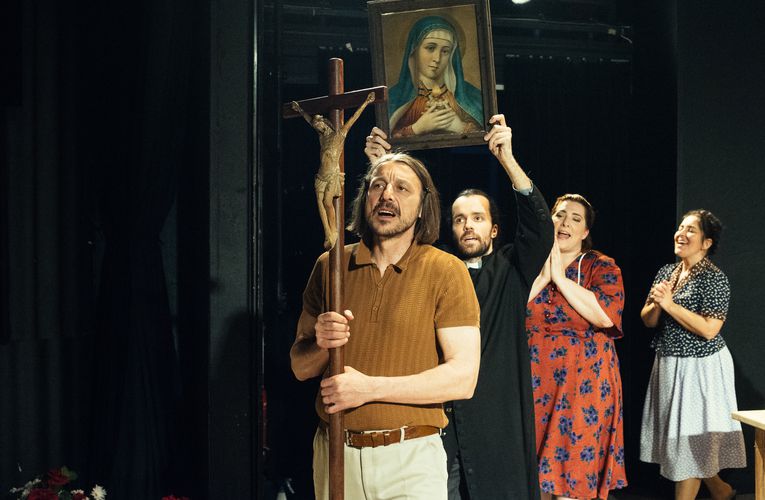 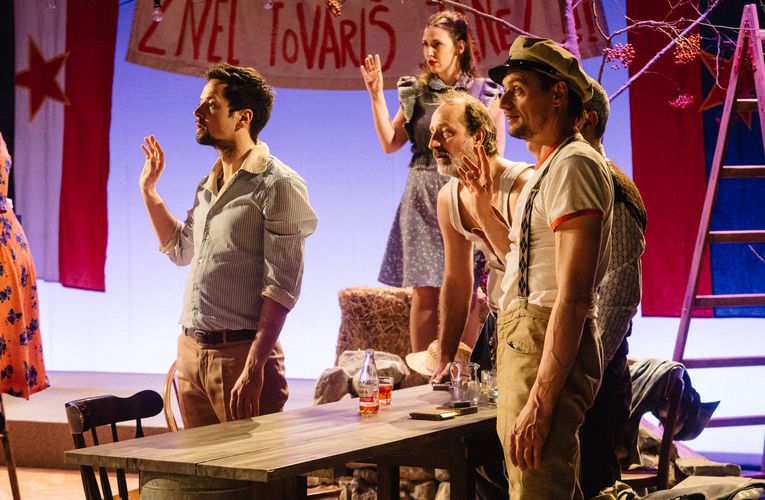 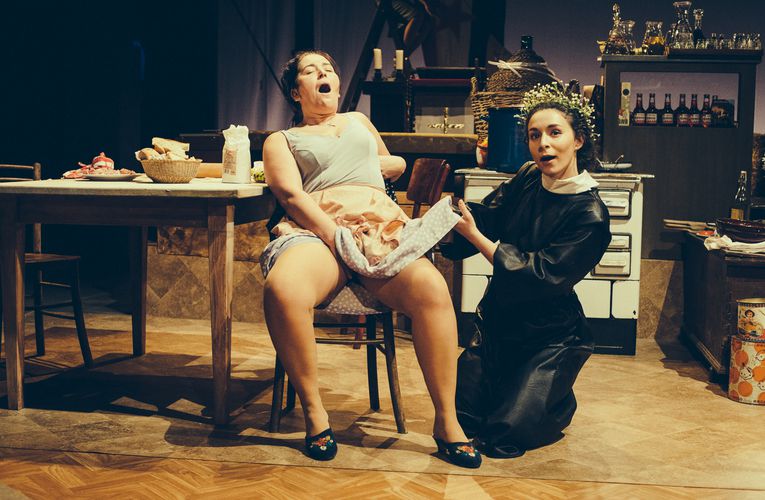 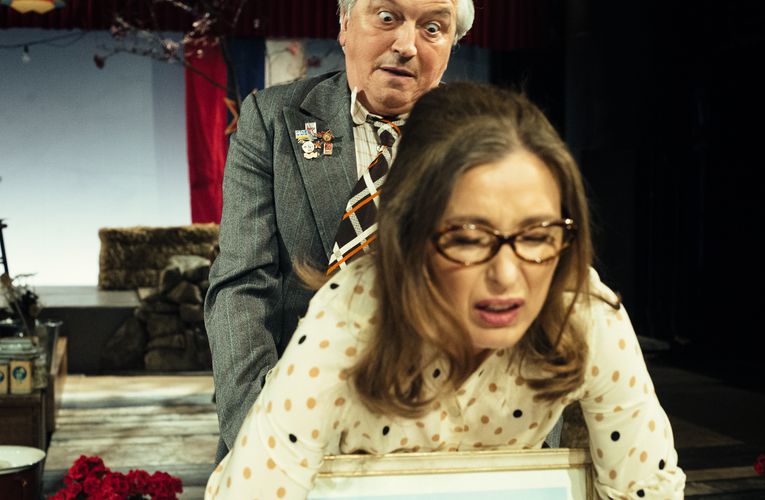 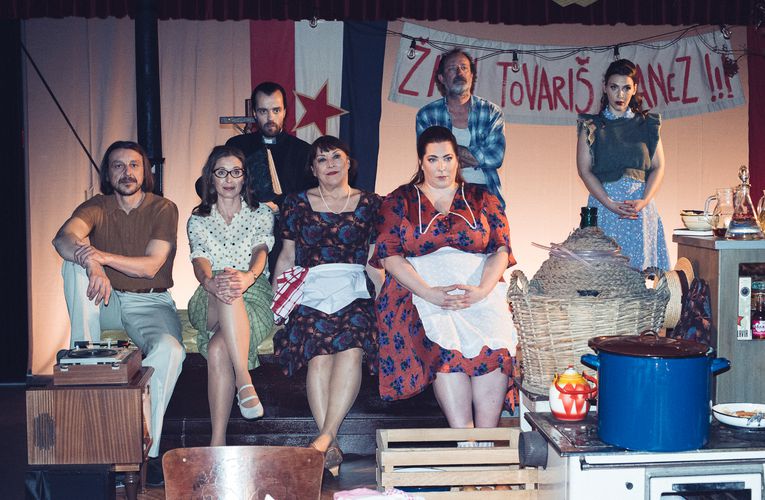 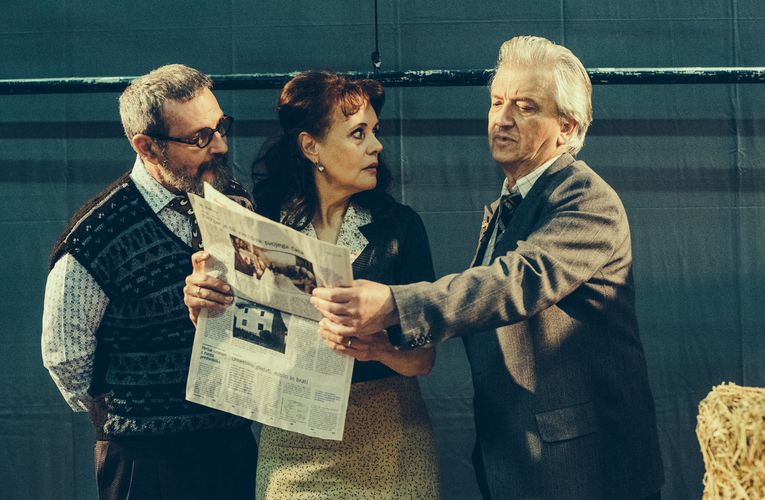 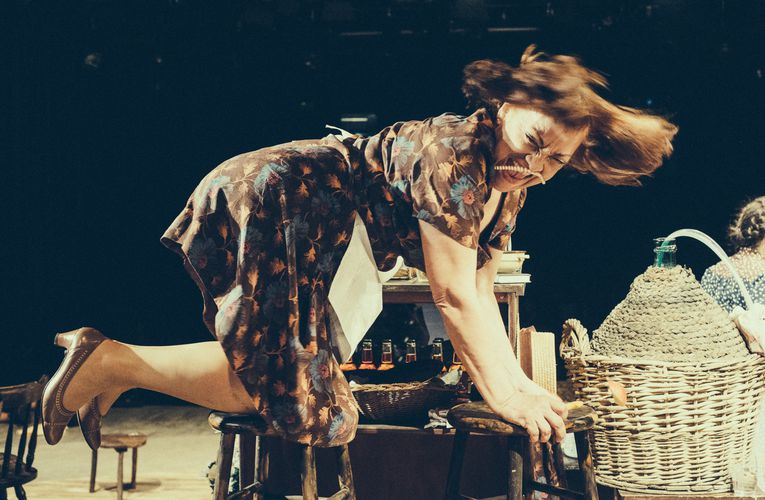 It is the 15th of August 1963 and the villagers in the Vipava Valley are getting ready for two events scheduled for the very same time – a religious service honouring the Feast of the Assumption with the Most Reverend Bishop and the celebration of the border guards of the Yugoslav National Army with the comrade Secretary of the Central Committee. They have some tough decisions to make: will they be loyal sheep or obedient comrades? At first glance, rowan, strudel, dance and more is a play about a historic period and the fundamental ideological schism between the Slovenes. But the more the issues untangle, the more they become a portrait of the contemporary Slovenian society in which pragmatic benefits easily replace ideological beliefs. The text keeps shifting between times and settings, and the political dilemma is spiced up with scenes of direct sexuality in which everyone selflessly licks, jerks off, penetrates, caresses, fondles, and rides whomever, whenever, and however. This textual bravura plays, on the one hand, with the comedy genre by questioning the borders of the comical and, on the other hand, with the bourgeois notion of theatre, which is willing to accept provocation but only up to a certain point.

We prepared the production in collaboration with the SNG Nova Gorica and thus intertwined two strong theatre traditions and poetics, just like two ideologies intertwine in the rowan. It is directed by Jure Novak, whose work always reveals interest in burning societal issues, who is no stranger to sexuality on stage, and who has already tackled Simona Semenič’s texts as a director. This time, he blended his experience and interests into a juicy whole that takes aim at “plastic” consumerist beauty ideals, sharply analyses the situation in the society and at the same time brims with vitality.

The laughter in the theatre is (unsurprisingly) triggered mostly by scenes that address sexuality. In any case, neither spectators nor actors can overlook this 'grand note', which evokes laughter, uneasiness, indignation and shame. The text itself in the beginning literally warns that it should not be approached by someone who has a problem with sex. The enthusiasm with which the team has opened the questions of sexuality, particularly the search for the border between the respectable and indecent, cannot remain unsupported. Like scenography, this also takes a rather explicit and concrete approach to the topic, which means the production leaves the door wide open to everything that usually happens under covers. […] This is definitely a satirical production of a strong collective, which doesn’t leave spectators unsatisfied, but it does slowly provoke them and stirs up thoughts and questions they do not necessarily want to discuss loudly. It offers a safe space where many (vulgar) thoughts resurface, the kind that are hard to escape from.

Fucks, farts, a priest and the reds make up for a relatively standard comediographic fare, but its directness provides an exceptionally fresh stage challenge. [T]he staging hits strongest when it’s just the text on the stage, when actors’ interpretation creates a turbulent course and vivaciously pulls the spectators on it. These 'spoken intercourses', at times equipped with minimal illustrations and a subject of constant voyeuristic observation from the cast members not currently actively involved in them not only create the wittiest and most titillating moments of the production – they are also the most beautiful ones emotionally. The real key to the vivacity is thus the acting power of the extraordinarily collective stage creation.

Director Jure Novak skilfully intertwined a number of scenes on stage so that the audience can witness all the action simultaneously, which gives the performance a killer rhythm and leaves the audience gasping for breath. The viewers are also left breathless by scenes saturated by sex; some actors are stark naked, but this is a normal part of such scenes. The entire cast was more than brilliant in portraying the celebration of the Assumption of Mary in the Vipava Valley, but Marjuta Slamič deserves a special mention for her role as the priest’s maid Bogdana. […] The play is performed in the Vipava dialect, which gives it a real charm. The ending is predictable: neither the bishop nor the secretary attends, but the villagers nonetheless celebrate the events, finally coming together to dance and party. Nothing can separate them there. That is the way it is.