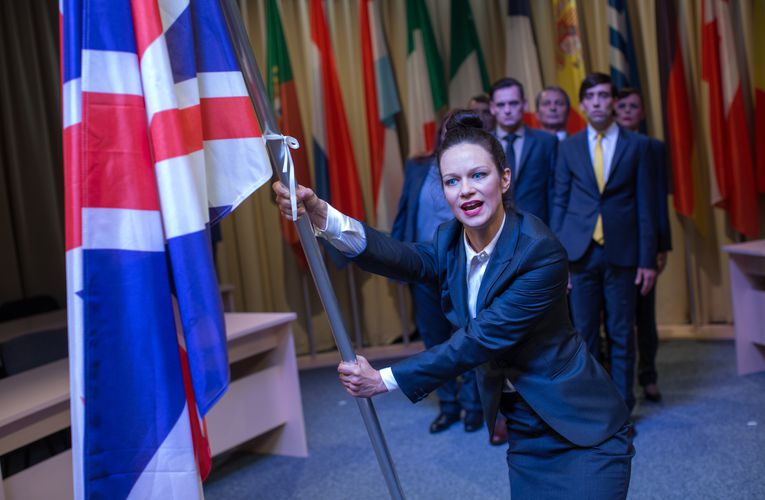 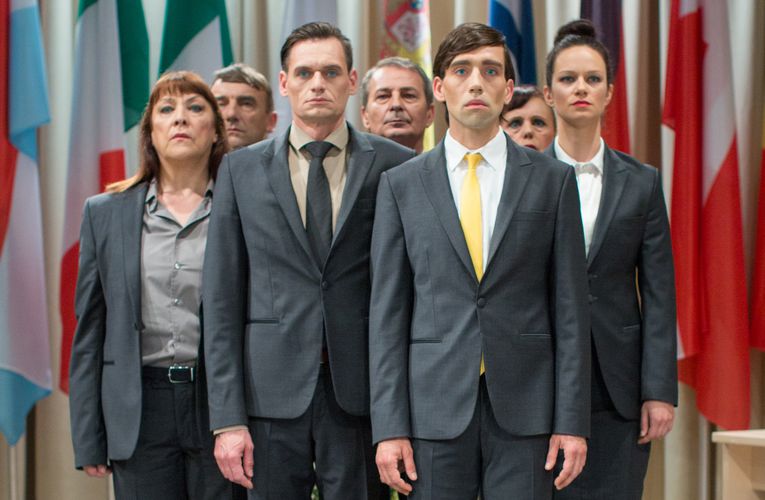 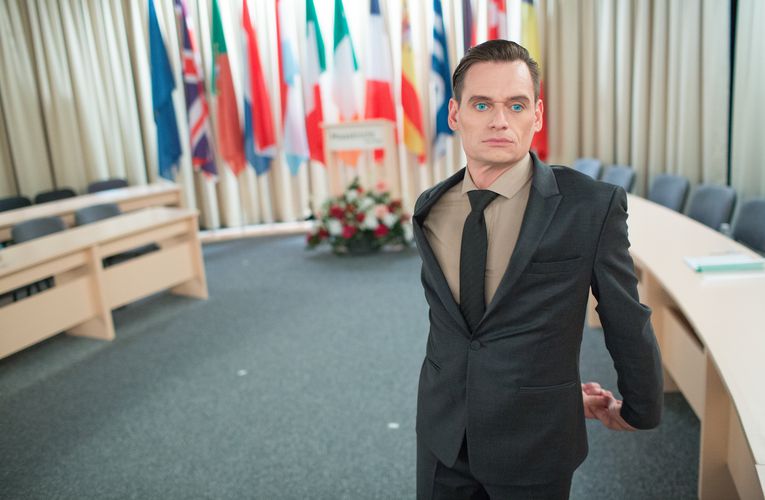 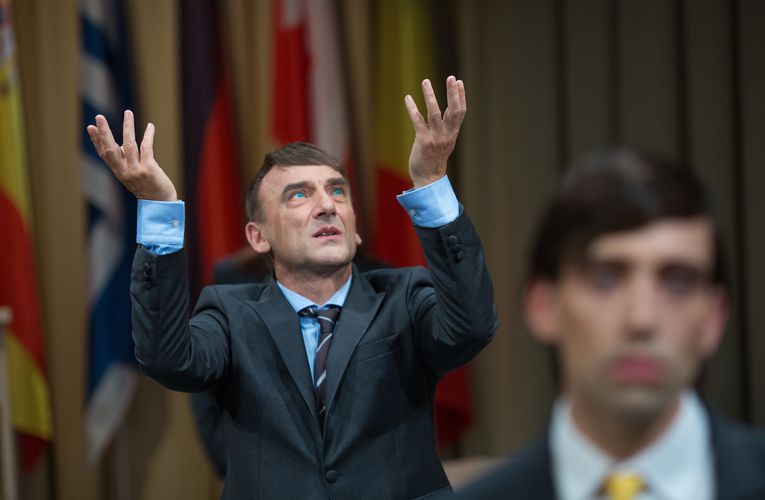 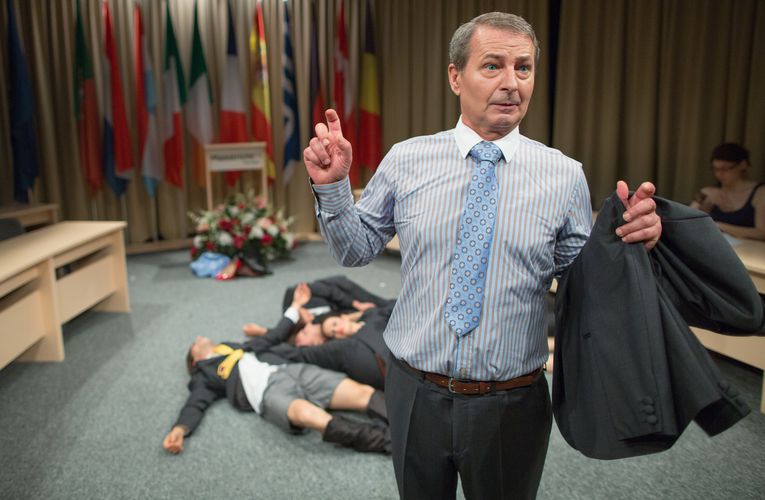 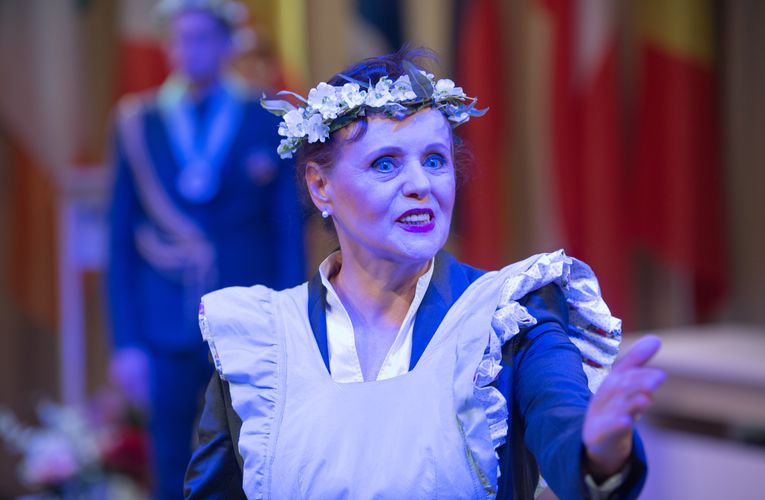 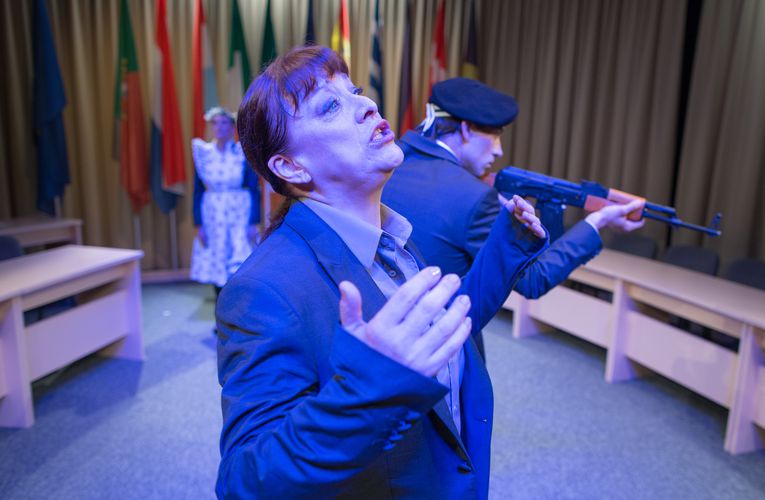 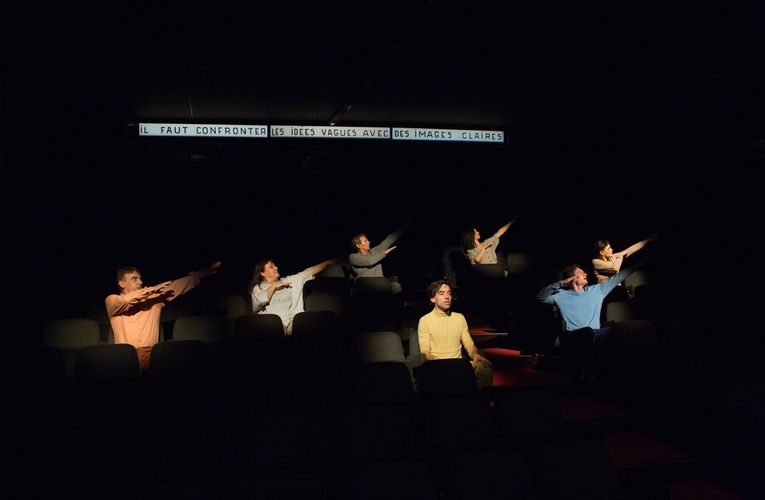 Directed by: Anja Suša
Inspired by Plato, Alain Badiou and others
The final version of the text was devised in collaboration with the team.
Première: 17. 6. 2019
Cast
Credits
Description

Who is the state meant for? How should it look like? Is democracy the proper form of governance? And what happens to the idea of a parliamentary system when private interests rule the state? This is a performance addressing the problem of utopia, since utopian ideas inevitably only mirror a contemporary image of the future. Or more precise: the problem of imaging something else then the state from within the state. It is a performance that poses a question of what kind of deimaging images we need being the ones who are trying to hold open the door and escape Plato's Cave. The project gathers an international crew of artists from different theatrical backgrounds trying to open a dialogue about the contemporary European societies in relation to arts.

The Republic, directed by the Serbian director Anja Suša, who has already worked with several Slovenian theatres, is one of the few that aims to offer two performances in one and manages to realise it convincingy; the performances stand on their own, but provide added value as a whole. […] This is a complex stage work which captures brilliantly the dark spirit of the modern time and opens a number of questions. When it comes to directing, there is nothing superfluous in the performance, both parts are staged thoughtfully and meticulously; the second part in particular part is original and has a lot of ‘theatre magic’, this time based on the perfection of the minimal number on theatre elements.

Through the characters, represented by the actors of the contemporary public life (from politicians, philosophers, actors) [the performance] asks questions about the values, particularly the question of a just community, and turns towards utopia, and then in part two […] uses the allegory of the cave or Plato’s thesis that theatre is a shadow of a shadow. It can thus offer only the idea that the spectators themselves can then draw in their minds. If in its first half the performance is very dynamic and the spectators follow it from a position of a parliamentary setting, in which the Maastricht Treaty was signed, it changes position completely in the second part and almost monotonously approaches the spectator who now sits onstage and looks into the hall through thought pictures. […] Do we still have enough freedom to connect all this and see the actual situation, or are we resorting to history and searching for something that never existed? The artists manage to overcome many questions and also the weight present in the performance with humorous, particularly cynical scenes that tell us we have not one left to lean on.

Utopia after Plato, in today’s circumstances of realpolitik, shifts into a complete dystopia in the context of the EU, both in its fruitless search for social justice as well as any kind of politics with sense and vision. The fundamental question is one of responsibility in society and for society. The happening is constantly relativised or loosened with cynicism, innovative choreography (Dragana Alfirević) and many humorous inserts, among other things, all the performers wear piercing blue contact lenses. Self-referencing interferes with the existentialist questioning of our time about ethics, honesty, just relations … Nika Rozman, Vito Weis and Primož Bezjak stand out in their suggestive impersonations, also with their consistent grotesque gesticulation.

[The Republic] is first defined by the concept of space (Igor Vasiljev), its dramaturgy of the reconstruction of the real and the rotation of the perspectives of observation. This tasks the audience with a multi-layered role and absorbing it in as a necessary (content) constitutive part of the whole. The audience is constantly involved and participatory, even though it is, for a large part, (seemingly) passive in this activity. In the first part, the audience symbolises the members of parliament with its presence, in the second, the audience is a ‘machine for imagination’, as it creates an individual internal staging of the event. […] But the most meaningful component is definitely the idea of the ruling politicians as naïve children who make up the rules of ‘the game’ at a whim as they go, the game that can be called, amongst other things, European economy, migration politics or financial rules.