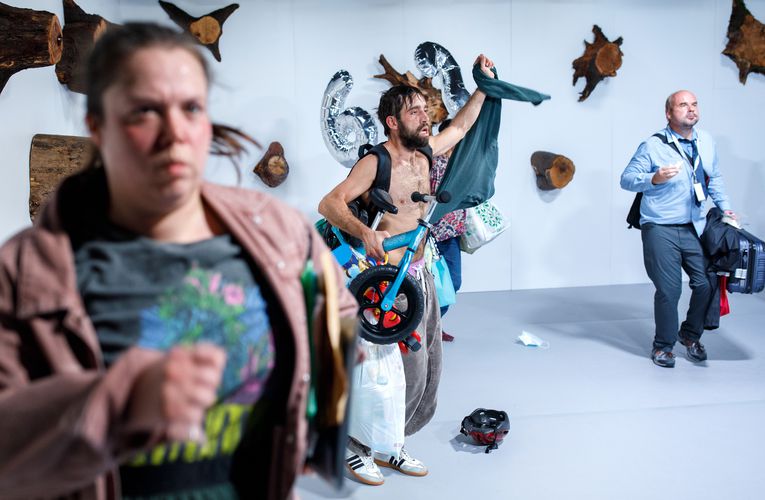 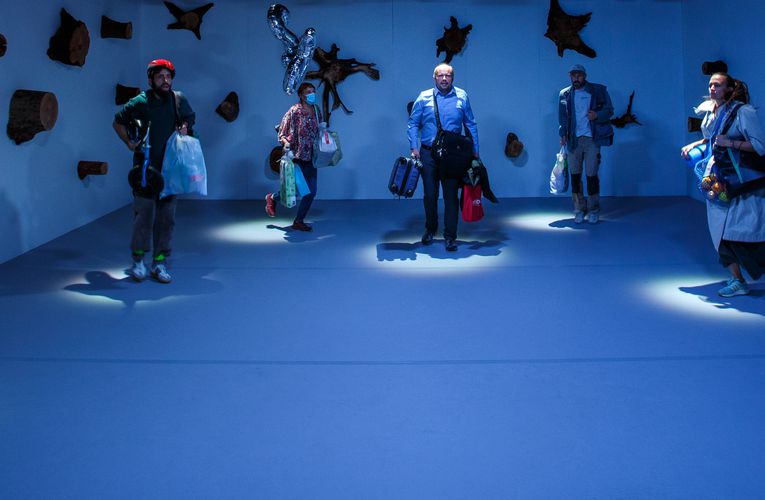 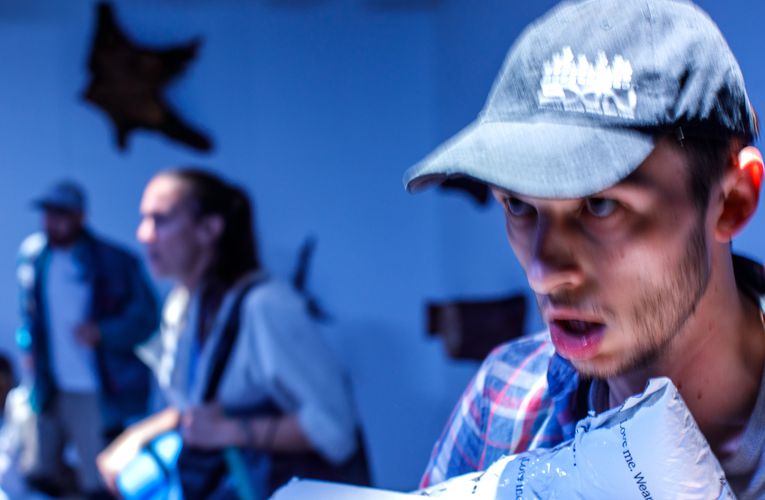 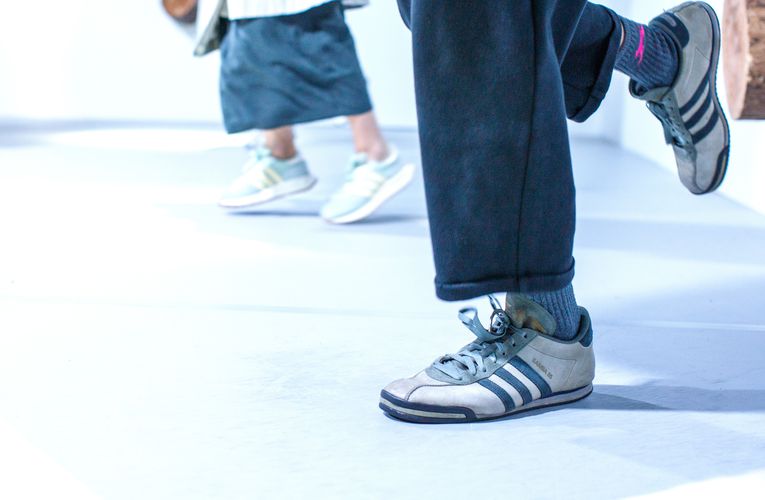 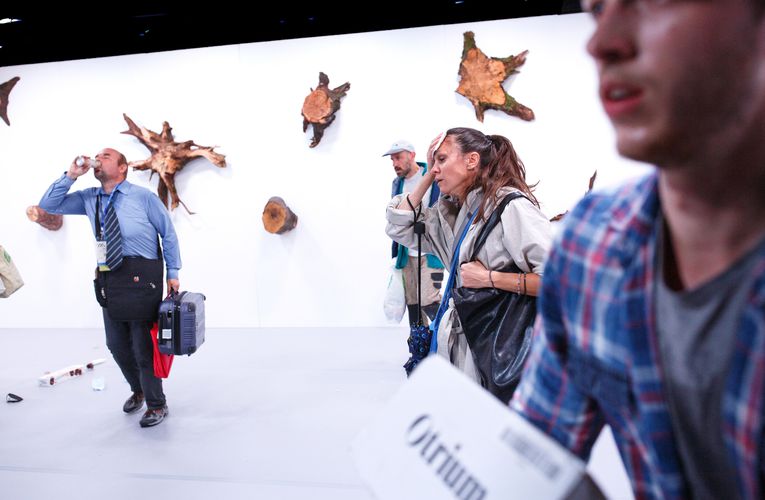 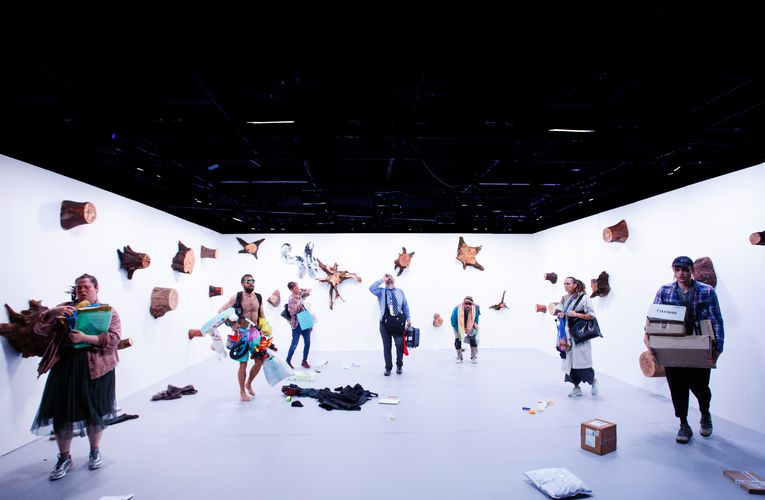 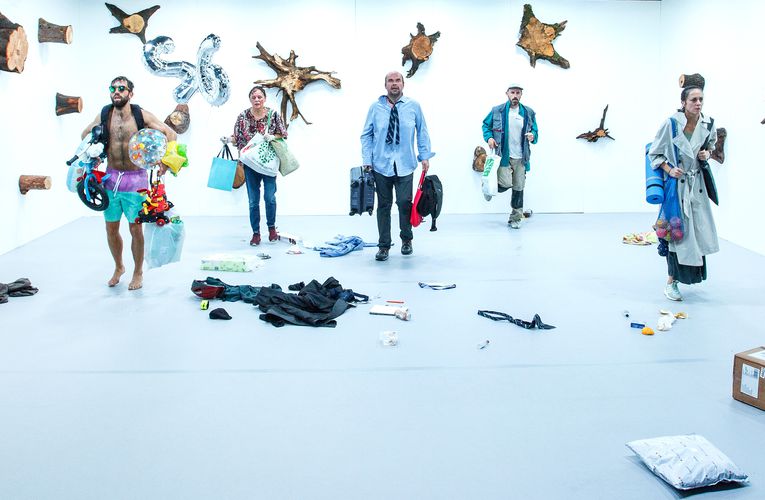 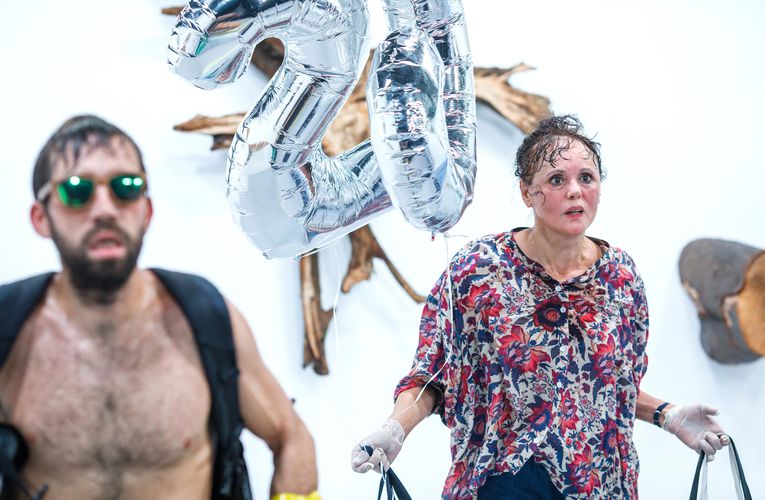 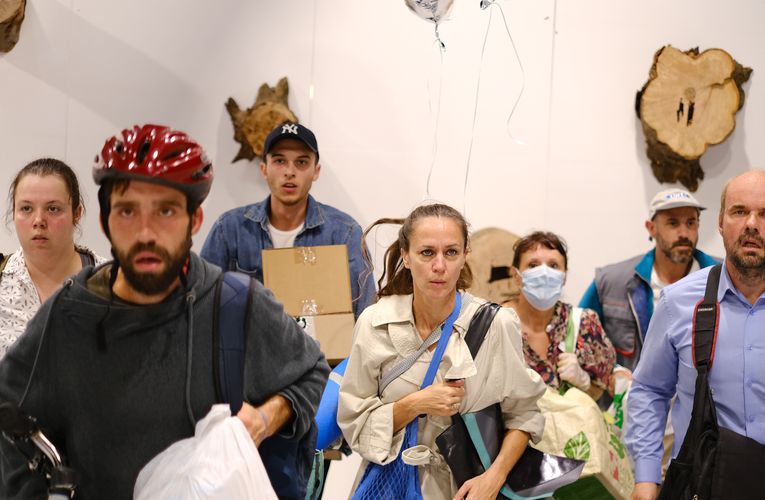 In life, we are constantly facing different crises – be it personal, professional, social, political, refugee, health, existential, etc. Behind them lurks maybe the biggest one in the history of humankind: the environmental. But in spite of its magnitude we are losing energy to solve other, ever new crises, trying to just restore the current situation … and forgetting that a crisis can be an exceptional time when seemingly impossible ideas become possible. The key question is: Which ideas? Those that would ensure more security, protection, health and well-being to everyone, or those meant to make the already unimaginably rich even richer? In Crises, Žiga Divjak and his team tackle all these questions and explore the human capacity for collaboration and the need to re-discover natural world not as a source but as our kin.

What distinguishes the production from a performative act is a voice, because it narrates a story of humankind and underlines the production’s documentary format. But above all, the narrator’s refined, non-metaphorical, rational, and causal-logical sequence counterpoints the existing spatial-temporal constellation on stage. The singularity of bodies in front of us acquires generality through the verbal story about the history of capitalism, which goes hand in hand with the history of colonialism, and the consequent accumulation of capital within the elites and its ideological dimension. On the aesthetic level, the production thus turns out to be a purely theatre experience, but one that at the same time acquired an educational, if not even agitational function. The latter turns on not only the empirical apparatus of the audience, but also the active role of a person as a political subject. By using a multitude of quotations to set up an exceptional number of narrative layers, Crises are the imprint of modernity; the layers split further on different meta-levels and the production uses this splitting to deftly eschew sliding into moralising.

The production presents its point with an almost insolent straightforwardness (to some, it may appear borderline naive and didactic), which is, of course, intentional, inasmuch this type of directedness is perhaps the only approach that might produce any kind of impact; at the same time, it places the production within an unusual formal concept, on the one hand, pared down to the most fundamental performative elements, and on the other, cleverly opening a layered network of meanings through this ostensible simplicity (dramaturg was Goran Injac). More precisely, we are dealing with a mixture of discursive and physical theatre, placed within suggestive minimalism of Igor Vasiljev’s set in which each of the two sides (can) offer a unique contiguous whole – at the same time the voiceover (Blaž Šef) constantly engages, in different ways, with physical acts and images formed onstage by the very committed performers (Sara Dirnbek, Iztok Drabik Jug, Klemen Kovačič, Draga Potočnjak, Katarina Stegnar, Vito Weis and Gregor Zorc).

Running in place is an excellent image, even a metaphor, for our stage of capitalism. The incessant competition, a race with all-or-nothing stakes, which never lets us move from the same spot. Or, which only lets us move towards the point of death.  […] We all know that this – if the world is to turn for another thousand years, day and night – must be stopped in any way possible. We all understand that change must occur on all levels and that art must contribute to it. We also know that Žiga Divjak had been doing this in his productions for several years before art and climate funding schemes and programmes went mainstream and that he discovered […] sensations that did not leave the spectators unmoved. This extreme human exhaustion achieves the same. The physical effort must also hurt the spectators, they must worry about the health of the actors, who are running the deadly lap of honour. They must sense that this is the real thing. […] And without a doubt: we bow deeply to this show’s runners.

The final call of the text […] is the appeal to personal gestures and mutual aid, to the attempts to build a community that might appear once we become aware of all the ways in which capitalism maims us.

The sensorial and visual code of Crises […] is the closest to a television documentary: aestheticized visual equipment, set, costumes, props, then human figures – simultaneously a type and everyman – that follow their historically and culturally conditioned compulsions, ambient atmospheric music that accelerates and decelerates the activity, adds emphasis, as well as the drama and fatefulness, and finally, a focused voice narrating the text from Jason Hickel’s Less is More about what went wrong with the development of capitalism in the era of anthropocene, or capitalocene. A minimalist expression of theatre signs actually evokes a memory of a traffic sign that once in the past directed us the wrong way, so the decisive shift occurs with the sentence about the precariousness of human life, which is the state of our time. It is a state of vulnerability that offers a new crossroads and the future will no longer necessarily depend on the past.

The message of Crises is more direct than the one of Fever, but it doesn’t avoid the abstract and builds, in front of us, a metaphor in a two-part structure. […] The title Less is More is also the guideline for the director’s distilled vision of the happening on stage. The physically demanding action of running in place in the first part of the production leaves real consequences on the actors’ bodies: sweating, flushed faces, heavy breathing. The physiological responses of the body that cannot be fully controlled thus materialise the exhausting of a human in a system that places productivity before sustainability. While running, the actors take off clothes, eat, post parcels, change clothes, but never move from the same spot. The action on stage thus makes the spoken text as tangible as possible. The juxtaposition of parallel lines of movement and a spoken essay allows the choice of the method to follow the content. Will you listen to the podcast, watch the stage, or give multitasking a try?

Despite its simplicity and lukewarm pessimism, Crises are a valuable performance that not only shows us the full danger of climate change but gives us the tools to analyze the cause of the problem: capitalism.

The Crises is a new peak in Žiga Divjak’s directorial history […] The stage action of Crises is pushed into the abstract and, also because of the symbolic distillation of the set (Igor Vasiljev), functions as a punch in the gut. In front of us, a group of runners in place, clearly snatched from their everyday rhythm, their image drilled into our memory membranes at least as strongly as the performance is physically exhausting for them. […] The chilling metaphor of the narration, also because of the precise socio-philosophical soundtrack, fills us with fear.