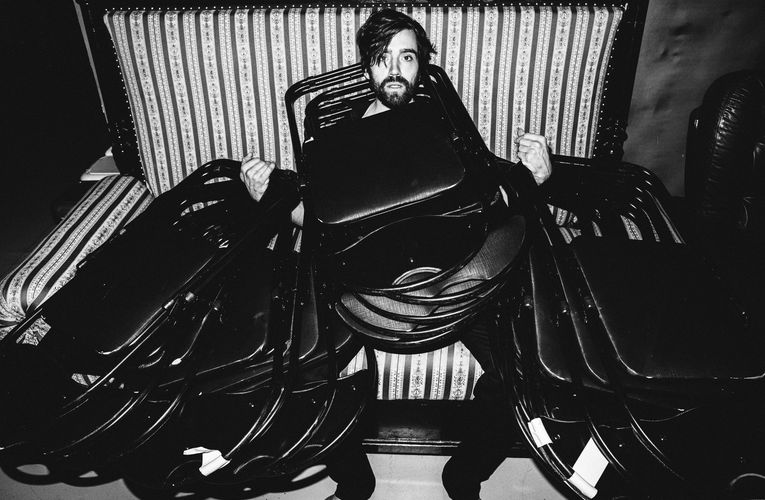 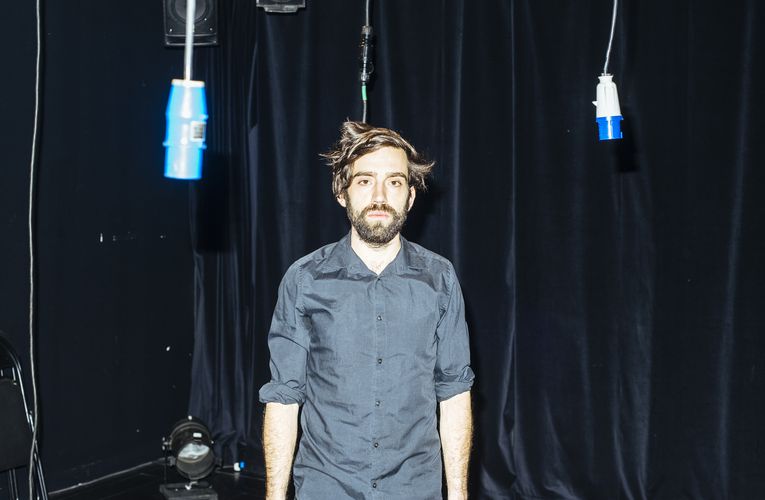 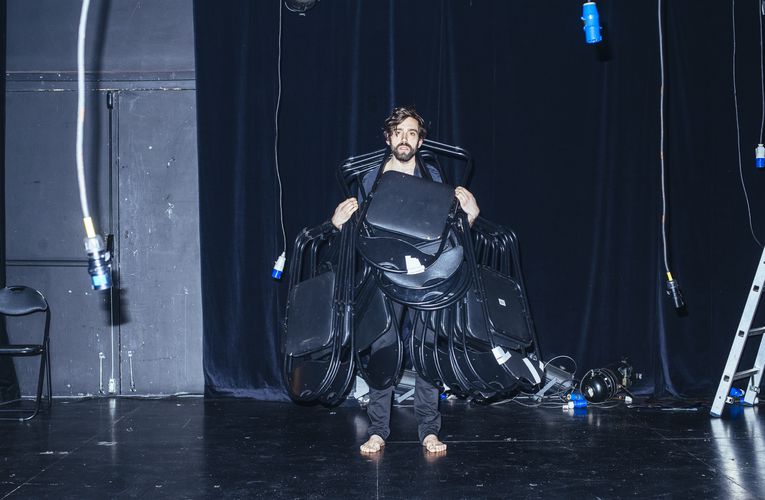 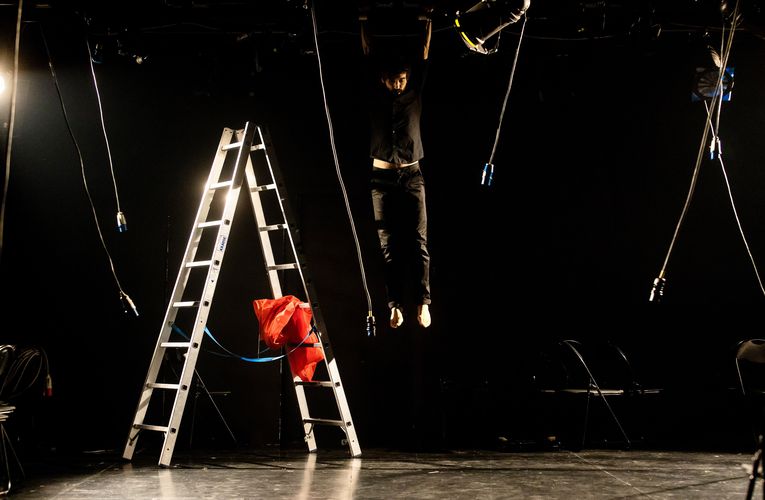 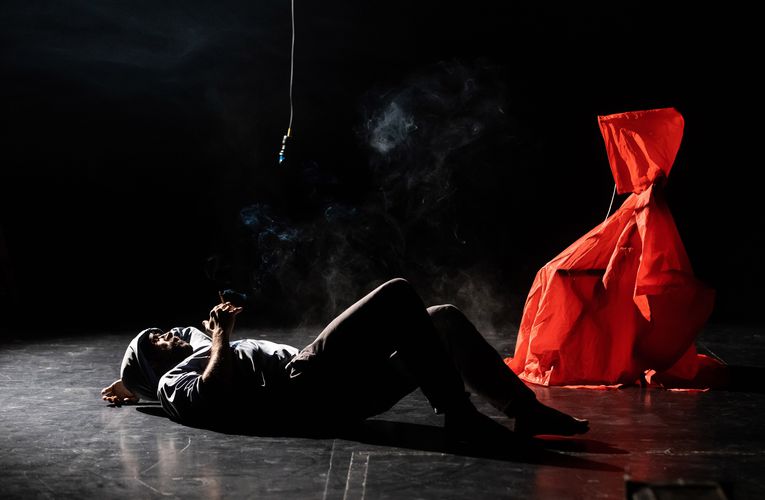 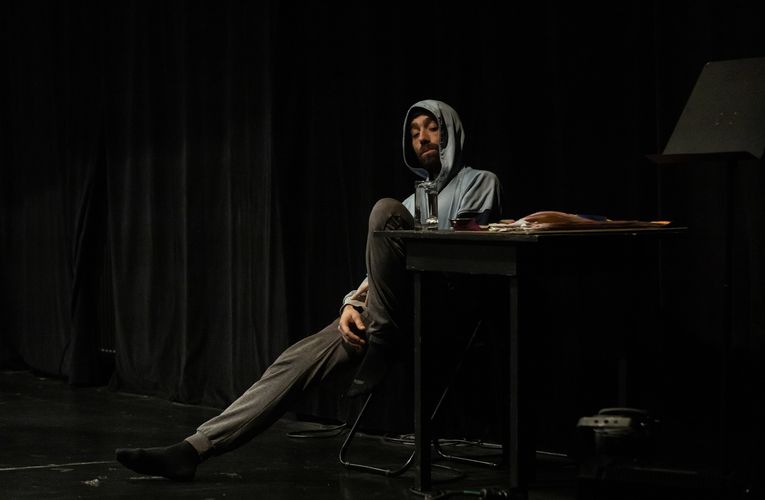 Vito Weis, an actor widely hailed for his stage presence and uncompromising delivery, strikes again with his first original solo piece. Early on, its development process was cut short by the pandemic, which shattered the initial ideas and premises, along with the author’s creative calm (or restlessness). While the pandemic shook the very principles of human activity, including artistic creativity, to their foundations, it also opened up new, uncharted horizons and an opportunity for new considerations. With the need to isolate came a strong sense of psychological insecurity and ... new company. We were suddenly left on our own—alone with ourselves.

Bad Company is a result of this—a distillate of the spirit of the age in desperate need of an audience. A distillate stripped of words and nearly all stage illusions that is nevertheless a full-blooded theatre experience. A distillate that refuses to be intrusive, instead offering a “multicoloured’ juxtaposition of stage images. In them, the author tackles many pressing issues of the day and age that we live in, while accompanied by music from another era—the time of a different epidemic.

[The performer] deconstructs the stage space during the performance, and transforms and uses its elements in a way that is theatrically deft and convincing. […] An empty hall, restlessness, tension, the play of light, moving chairs just like moving our view of things. The actor […] shows the silent spectators a different – his – view of the world, of the things that surround us, when he tries, with the help of details, with perfectionism to break the spell, as if he wanted to use this activity to break the spell of an empty hall. A red raincoat that remains alone in the middle of the stage at the end. The actor, who with his body charts a circle in the dust surrounding the red dot, which is the essence of the actor; this is his audience. A brief moment of despair dispelled by a tiny swing of a cable triggers a new cycle of researching and showing actor’s tools of movement, his tool of sound.

Vito Weis’s solo project Bad Company is an authentic insight into the core, the essence of theatre and the creative process. The theatre itself. Into that actor-author’s moment when he remains on stage completely alone, with merely some basic props (spotlights, chairs, a ladder, a desk, a mixing deck, a laptop, a red raincoat), surrounded by darkness and mystery, in the field of total creative vulnerability. A performative confrontation with himself, his own artistic work has for a long time not been this elementary, so extremely vulnerable and exposed. […] In just over an hour, the mere presence of the fragile body in space and theatre objects grows from the insecure, wandering beginning of almost uneasiness to the final power of the moment that only a live theatre experience makes at the same time fleeting and eternal. He catches the Zeitgeist in all its banality and the sublimeness at the same time. […] Is it even possible to catch the essence of theatre and a difficult moment without verbal engagement?

Although the current social context of the pandemic is implied in Bad Company – investing the production, in a way, in the present moment – Weis’ work manages to rise above this. Reflections on the ontology of theatre, especially the question of how a piece of theatre exists and what it necessitates, are not conditional on the current situation. It coexists alongside, but also beyond it. […] Besides this meditative and almost philosophical level, there’s also, as implied above, a more intimate and perhaps more socially engaged aspect to Bad Company, one that is fundamentally affected by absence: the absence of an audience, the absence of other cast and crew, the absence of the theatre as a place of exchange and a specific form of (co)existence. Despite this absence, which feels unbearable at times, the production implies that this is not the absence of art and/or creation. As soon as he finds himself alone, Weis creates a very compelling work, giving space – and voice (very literally in the scenes with a microphone) – to the essential elements of theatre (space, light, sound and props), coupling with them and creating a reflective, poetic piece of theatre that is simultaneously a play, improvisation and trial, which can (though this may not be its intention) even make sense on its own, with Weis but disengaged from an audience.

In a sensitive, unaggressive way, Bad Company manages to address a tired issue that has been addressed, seen or heard about so many times before: creation during a health and cultural crisis. Showing the bare state of things, the production is comprehensive and impartial in its analysis. It avoids falling into episodic sameness; rather than preach, ideologise or politicise, it remains critical in its minimalist perfection. In a format that is open to interpretation, it sensitises the spectator and encourages reflection so they can form their own opinion.

There is nothing but a space, a space of theatre – and the items that belong to it just like [the actor]. He can act or play using only himself and these items; the entire “performative potential” is already there. As it turns out in the next hour or so, there is plenty of it to explore. Theatre is a place with its own reality where the relations between its “constituent elements” are constantly being rearranged, with meanings appearing and disappearing. Where everything is temporary but not perishable. This is precisely why episodes […] gradually start clumping together into a whole, forming an audio-visual narrative about the very heart of the creative process. In an unadorned language specific only to theatre, Weis speaks up about everything that precedes (and underlies) a production, be it creative anxiety, moments of idleness, the constant testing of options and checking what has already been created, doubts about the meaning of it all, the often conflicting dispositions, ideas and solutions, the weight of expectations and desires. Or simply the sound of the actor’s heartbeat.

One could say that Bad Company is one hell of a love story. Dedication, patience, sacrifice, commitment, exploration, small victories, big efforts... All these motifs are woven into it, and yet the production is not about two people in love; it is about love for theatre as a platform that, from the actor’s point of view, doesn’t exist without an audience. […] Vito Weis effectively plays with scenic elements, using theatrical illusion to transform them into an auditorium and a crowd, his audience, finding props in an empty theatre hall. […] Weis invests so much effort into his on-stage illusion that he ultimately manages to dance in front of an imaginary audience. In the epilogue, in a performative twist, he returns to the realm of love, sacrifice and persistence. And the real spectator feels reassured, for the scene demonstrates that the memory of theatre as the foundation for the creative process has been left behind; that theatre remains alive.